Warrant officer Gay Guess reporting in with news from the Canadian military gender wars. Take my word for it; they are non-stop, Sir.

I’m currently assigned to the Canadian Army Doctrine and Training Centre. My orders are to support National Defence Headquarters with the total integration of advanced gender perspectives for our military leadership.

I am working under the command of General Tom Lawson, our most senior commander. General Tom is set to retire in the fall and he’s told me that he is keen to successfully complete this assignment.

Full disclosure: General Tom suggested in a recent CBC interview that some male soldiers are “biologically wired in a certain way” and that The Wiring means they must press themselves and their desires on female soldiers. (Noting the issue of Female Wiring was not discussed in the interview and it’s also not clear whether The General believes The Wiring plays a role in male-on-male desire pressing.)

General Tom has freely acknowledged that he has “awkward characterization” issues when it comes to gender mainstreaming in our armed forces, Sir. I frankly, but respectfully submitted to General Tom that until he gets a handle on his awkward disclosure issues, our mission is at risk.

This week General Tom and I began to go over a short list of fairly standard questions designed to get a deeper understanding of how he – and his cohort – truly thinks about male and female roles, activities and desires. 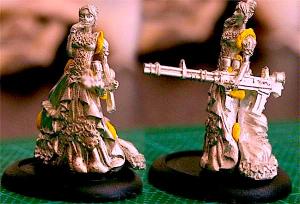 Questions for the General:

Guess what, Sir? General Tom does not get it – not any of it. And, every day he has a new excuse.

Yesterday he complained that the Conservative government abolished leadership training years ago because they already have the leader they need (that leader is not female, Sir). He said that put the kibosh on the Forces’ inspiring equality workshops. Sir, he actually cried when he told me how badly he misses becoming a non-sexist man.

I handed him a tissue thinking, “Yeah, sure, tell me another one, General Tom.”

But, what if he really is looking to change, Sir. What if he desperately needs the kind of inspiration only old feminists such those at HvH could provide? What then is my duty, Sir?

P.S. Here’s another question that baffled General Tom: What does shopping for bargains mean?

Girl, You Don’t Know How Much Power You Have.

STAMPEDE TO THE POLLS

Humans vs. Harper is urging everyone to be on the alert for stampeding voters on October 19. YIPPIE KAI YAY!

Federal Election 2015, CanadaOctober 19th, 2015
Get out and vote! And take your friends with you.

Dear Stephen, It's Over
Trapped in a Whirlpool
Montreal Simon
Harper Watch
Harper's Crimes Against Humanity